(Updated: March 2022) The street art scene in Hong Kong is relatively new, but there are some great artists in the city and there are a now lots of places where you can see more beautiful artworks.

In different districts, different styles and formats of street art predominate. Let’s take a tour though several of these neighborhoods.

The following gallery features street art pieces that were created during the moon festival in Hong Kong in 2012. Click on any of the below images to open the gallery slideshow.

Those works were on the side of a highway overpass. While taking these photos in 2013, I spoke to a woman who lived nearby and she told me that the pieces were done during the previous year’s Mid-Autumn Festival (at the very end of September). The location is well hidden, so the artists could work uninterrupted. Some of the visuals, such as the rabbit image, are related to the festival (according to Chinese legend, a rabbit lives on the moon with the moon goddess Chang’e. There were around 30 pieces (including wildstyle works) on the wall.

These street art pieces were eventually painted over by the Highways Department, but new works popped up. Here are two of the works there in 2016:

You can view the entire set of over 200 photos in this series:

To view the following pictures in a slideshow, just click on any of the photos.

There is an alley one block to the west of the Mong Kok East MTR station that serves as a kind of ‘wall of fame’ and has lots of elaborate pieces in a variety of styles. It’s one of the few places where impromptu street art is generally left alone by the authorities. It is also home to a few homeless men who live in make shift cardboard shelters. Just around the corner is Argyle street, which is jam-packed with shoppers and tourists. It seems that there is an unspoken deal in place: ‘you can do what you want in this lane; just don’t take it outside’.

In recent years, the alley has become a popular Instagram spot. As it is such a popular location, the turnover rate for the artwork is high and beautiful pieces get tagged or painted over frequently. The photos in the gallery above were taken in 2012 and 2013 and those pieces have been gone for years. Here are newer pieces.

Some of the pieces have a local flavor.

Here are some of the more recent wildstyle works:

You will also find lots of stickers in the alley.

Mong Kok and Tsim Sha Tsui are busy commercial and entertainment districts in Kowloon with things going on round the clock. It’s a challenge for graffiti artists to even find a blank wall yet alone work undetected. Thus, the art tends to be something that can be done in a hurry (tags, stickers or stencils) and is often done in dingy alleyways. There also tends to be a lot of crazy messages left on utility boxes and lampposts.

The street art in this area has improved a lot during the past few years. This is largely due to

This area of Hong Kong is now the go-to place for finding street art in the territory.

Here are some images of the HKwalls 2018 artwork:

The HKwalls festival was also held in the area in 2015 and some of the artwork is still around, such as this mural of Bruce Lee.

Here are photos of Art Lane in Sai Ying Pun

You can view the entire sets of photos here:

These street art photos were taken in Wanchai and Causeway Bay (perhaps the busiest shopping area on Hong Island). Because these are such busy areas, with things going on round the clock, the street art used to be done in a hurry, with paste-ups, stencils and tags are the most common forms of artwork. Here are some of the older works.

HKwalls (hkwalls.org) held its annual festival here in 2019, and the area now features more complex pieces. This festival is doing a great job at helping the local street art scene develop. It gives opportunities to local artists and brings in artists from overseas (who can provide inspiration).

Here are some more recent photos not featuring work from HKwalls 2019:

You can view the entire sets of photos in this series:

While walking through this mixed residential, industrial and commercial district in 2019, I was pleasantly surprised to see a lot of street art pieces on the walls and metal shutters of the businesses there. Most of these works had been added as part of a neighborhood revitalization effort. The art part of this project was entitled Freegate (自由閘).

You can view the entire sets of over 50 photos in this series:

Click on any of the below images to open the gallery slideshow. 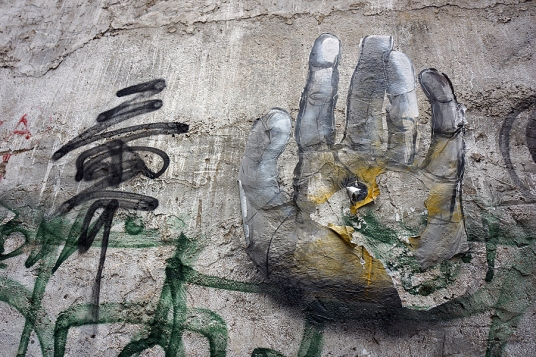 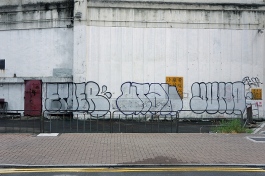 The streets of the industrial areas of Kwun Tong, Ngau Tau Kok and (to a lesser extent) Kowloon Bay used to feature a lot of graffiti compared to other parts of Hong Kong. However, in the last few years, the area had been redeveloped, with office buildings replacing the old factory buildings. As a result, there is very little street art there now.

The street art in this photo gallery was spread out through the entire industrial part of the district. It took around four hours to take all the photographs. There seemed to be more stencil work and paste-ups (paper-based work that is done beforehand and then affixed to the wall) in this area of the city.

The photos in this set are featured in the following video:

Here is a more recent piece in Kowloon Bay:

You can view the entire set of photos in this series (over 140 images):

Located on the south side of Hong Kong Island, Wong Chuk Hang is home to many art galleries. It was selected as the site of HKwalls 2017. Here are some of the pieces that were created:

You can view the entire set of photos in this series:

Due to a few art activities, there are now more street art pieces in Sham Shui Po and Nam Cheong. The following three murals were created for the Heart of Cyberpunk Festival by Design District Hong Kong in 2019 (ddHK).

The same organization, ddHK, commissioned the following mural by kristopherh in 2021.

As part of an urban beautification program, the Drainage Services Department commissioned this ornithology-themed mural by AXE Colours Hong Kong. The mural showcases some of Hong Kong’s native bird species.

The 2016 version of HKwalls was held in Shan Shui Po in 2016. It included the following works:

Perhaps the first graffiti artist in Hong Kong was thee self-proclaimed Emperor of Kowloon Tsang Chou-choi (en.wikipedia.org/wiki/Tsang_Tsou_Choi), who throughout the 1980s and 1990s painted messages in his distinctive Chinese calligraphy claiming that he was the rightful owner of the entire peninsula. At any one time, there were a few hundred of his messages spread around Kowloon. He tended to write on government owned walls and utility boxes, perhaps because he viewed the government as the thieves who stole his family’s land. He died in 2007, and towards the end of his life was considered an artist, with galleries curating exhibitions of his work. However, it took the government a while to realize that his graffiti was part of Hong Kong’s collective memory and by the time they took measure to preserve his work, only three pieces remained. These are now sealed in plastic (the easiest to view one is at the Star Ferry Terminal in Tsim Sha Tsui). I took the following two pictures many years ago in Diamond Hill.

You can find street art scattered in other areas of Kowloon as well. There is some in Kowloon City and quite a few pieces in Kowloon Tong, the latter of which are usually found on walls in the alleys between upscale condominium complexes. Other photos in this series were taken in Cheung Sha Wan, Lai King and Kowloon City.

Click on any of the below images to open the gallery slideshow.

You can view the entire set of photos in this series (over 150 images):

11. Street Art in the New Territories

This gallery features works from around the Tai Wai, Fotan (where a lot of artists have set up studios in factory buildings), Ma On Shan Tai Po and Wu Kai Sha. These are the areas just north of Kowloon (on the other side of Lion Rock). Recently street art pieces have been popping up in Sai Kung, a seaside village popular for its seafood restaurants and cafés.

In the New Territories, you can often find graffiti on factory walls and near bike paths. Click on any picture to view the gallery as a slide show.

In Ma Wan Village (Lei Yue Mun), several colorful murals were painted in 2020 as part of a project to beautify the village, which is primarily known for its seafood restaurants and sea views (Lei Yue Mun Neighbourhood Level Community Development Project—Mural Art Village).

You can see the entire series here:

In the past, I used to document pretty much everything I saw including tags, very basic throw-ups, very faded pieces, and close-ups. I’ve since removed a lot of those from the main albums and moved them in this Google Photos album: Miscellaneous Shots (300+ images).

I also have a few street art galleries on my artjouer blog.

~ photos and text by longzijun

Return to the Main Photography Page